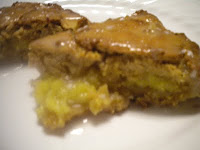 I have recently been buying up great quantities of the amazing Almond Joy creamer from International Delights. It is a limited edition, which means that I need to consume as much as possible before it goes away. Right?! Yes, I have an addiction to both coffee and creamer, and this month's Ratio Rally baked good goes perfectly with both. Given my current obsession, it is natural that my brain went immediately to coconut. Coincidentally enough one of my very favorite things in the whole world.

I don't remember the first time I ever had a Mounds or an Almond Joy or even that first taste of sweet coconut. I do remember the first time I had haupia at Camp Paumalu on the island of Oahu. It was the most amazing, melt in your mouth treat I had consumed in a long time. That was 1989. I remember when See's Candies re-introduced the Coconut Special for their anniversary. It was all luscious flaked coconut, honey and dark chocolate. I, also, remember the first time I made a German Chocolate cake for my library school roommate's birthday. It wasn't pretty, and the cooked frosting had odd bits of egg in it. She loved it though. See? I have a thing for coconut. 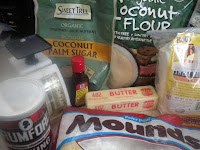 The first thing I will tell you is that there isn't an official ratio for scones. They aren't really a biscuit (and my biscuit like, slightly doughy versions are going to make lovely pudding), and they aren't really a bread or a Scottish pancake. I had no idea that I would spend 30 minutes researching drop scones in an effort to make something the monkey liked. He wasn't overfond of my first version, which is what you are getting here. They were to mushy, I believe he said. Upon further discussion, he just didn't like the flavor or texture of the curd. Good enough. I tried something else. You aren't getting that recipe as it still needs tweaking, and my grocery bag of ingredients is empty. Maybe another time. Again, he made the suggestion that they would be better with chocolate. What wouldn't be made better with chocolate, really? 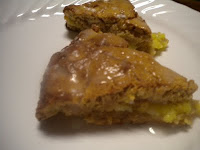 The recipe that I based this off of is from Betty Crocker for Ginger-Lemon scones. I have made it a number of times using the recipe as is and the lemon curd I have linked below. It is wonderful, which is why I wanted to do something similar here. The ratio works out to be 3:1:0.5 (flour:liquid:fat). With my choice of coconut flour, I found myself using twice as much liquid as called for due to its ability to absorb a lot of liquid. This is alright though as others had much success with the 3:2:1 ratio or in my case I still have that .5 fat. That makes them less fattening, right? 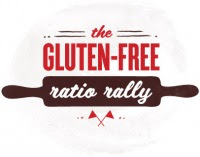 Make sure to go and see all the other scone recipes! 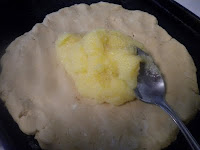 Preheat oven to 400 degrees F. In mixer bowl, combine flours, starch, sugar, coconut, and baking powder. Cut in the butter slowly by cutting off small rectangular pieces of the butter, and dropping them in while the mixer runs on low. It should resemble a crumbly mixture in the bowl when it is done. Don't over mix. Slowly add in the milk and coconut extract. Mix until well combined, and the dough has formed a ball or is just sticking to the paddle. Divide the dough in half. Roll the first half into a 7 inch round on a greased cookie sheet. Spread 1/4 to 1/2 Cup pineapple curd over the top to within an inch of the edges. Roll the other half of the dough out into a slightly wider circle, and place on top of the curd. Pinch/press the edges together to keep everything looking pretty. Score the top into 8 slices remember to cut short of the curd layer. Bake at 400 for 35-45 minutes. Glaze while warm. Serves 8.

Stir all ingredients together until smooth. Drizzle over the tops of warm scones. 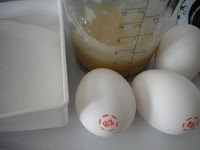 Pineapple Curd (based off this Lemon Curd recipe)

Using a handheld blender or small food processor, puree enough pineapple tidbits/chunks/rings to make 4 ounces of liquid. In a medium pan (because a soup pan is to small), whisk your eggs until they are broken up. Stir in the sugar. Add pineapple puree and melted butter. Cook over a medium-low heat, whisking constantly about 15 minutes or until it has thickened. Let it cool in the pan, and then refrigerate overnight.

Note: Ideally, the double boiler method called for in the original recipe is what should be used. I am not in possession of such an item, and my homemade attempts at one often leave me with food on me and the floor. 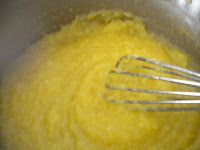 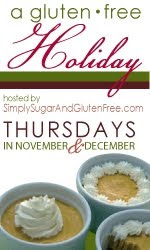